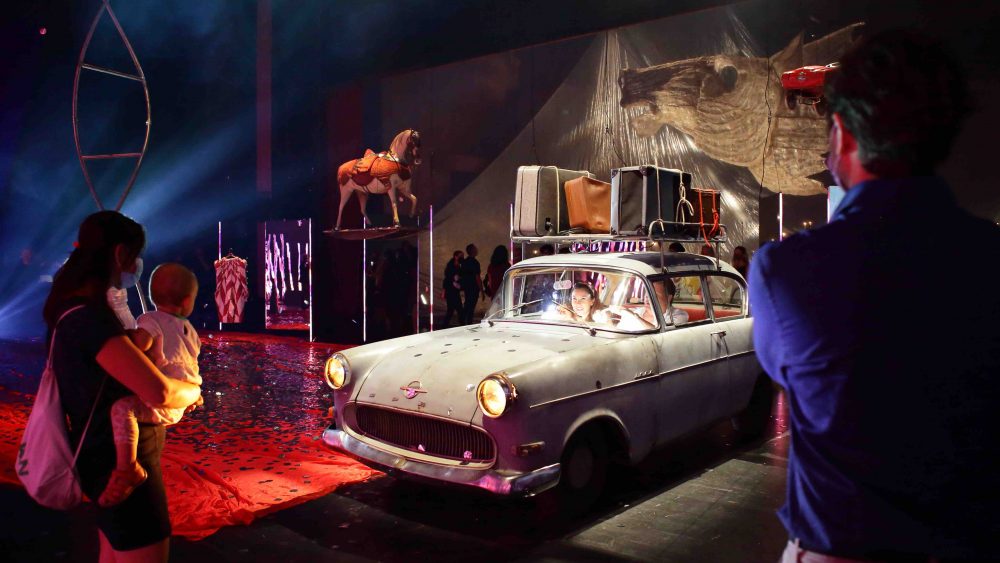 Great public success for Luna Park – like a fairground ride.

Over 7,600 spectators for the new creation of the Compagnia Finzi Pasca!

The long 12-day fairground ride of the Compagnia Finzi Pasca ended last Sunday on 20 September 2020, and it is already a success. The new social distancing-compliant format of show conceived by the company as an artistic response to the period we are living through was greeted with enthusiasm by public and critics alike.

Of the over 7,600 spectators, many were young people, including 460 students and many young children: in fact, 1,130 under-14s took their parent’s hand and led them from the backstage area onto the stage, through a forest of lights comprising 418 metres of LEDs, beneath a shower of around 5 million pieces of silver confetti (almost 50 kg). And then there was the “imagined” auditorium, covered by 1,250 square metres of silvery fabric delicately illuminated with around 300 interactive lamps.

“It was thrilling to see how we were greeted by audiences and critics, and at the same time it was a great challenge: to amaze people and make them dream in just 20 minutes could not be taken for granted,” the company’s founders, Daniele Finzi Pasca, Maria Bonzanigo, Hugo Gargiulo and Antonio Vergamini, say with enthusiasm. “Hopefully this is the start of a new adventure  for the Compagnia whose all international tours have stopped since last March; a new format which in these very uncertain times will allow people to continue to dream”.