Sunday, June 4th at 2:30 pm at Studio Foce in Lugano, the documentary Ana, written and directed by Antonio Vergamini and filmed and edited by Walther Sievi, will be presented at the Integrated Arts Festival of Italian Switzerland, Orme Festival, within the project Diversamente Cinema [Different Film].
Ana (which won the first prize at the 2010 International Documentary Festival of Abruzzo) tells the story of the beginning of Ana Heredia’s theatrical adventure. The film is produced by Compagnia Finzi Pasca and Atelier Sievi, in ​​co-production with RSI. 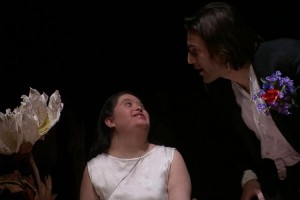