Dear friends,
With a deep sadness we share with you that our beloved Julie has left us on saturday May 14th, 2016 in the morning in Lugano.
We tend to thank you all for your words, prayers and wishes of recovery and support and all the love manifested to her and Daniele all the time but most of all during this last year. They all certainly accompany our dear Julie in her journey and stay in Daniele’s heart. 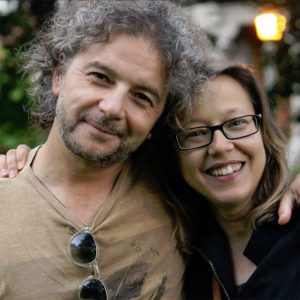 Julie Hamelin Finzi gathered more than 20 years’ experience in the world of contemporary circus and performing arts. At the age of 21, she co-founds Cirque Éloize (a leader in the new circus genre based in Montréal, Canada), allowing the company’s creations to be presented on the world’s most renowned stages. In 2001 she meets Daniele Finzi Pasca, beginning a rich personal and artistic collaboration. In 2006 she is part of the stage direction team creating the Closing Ceremony of the Turin Winter Olympics. In 2009, together with Daniele, she launches Inlevitas, a company created to foster a range of new artistic projects, including opera, acrobatic theatre and documentaries (first project: the opera L’Amour de Loin (Love from Afar), for the English National Opera in London, 2009). In 2009-2010 Julie acts as creative associate for Donka. A letter to Chekhov, a production of Compagnia Finzi Pasca and the Chekhov International Theatre Festival in coproduction with Vidy-Lausanne Theatre, created for the 150th anniversary of Russian author Anton Chekhov. That same year she starts working on the project of a film written by Daniele, Piazza San Michele.

In 2011, together with Antonio Vergamini, Daniele Finzi Pasca, Hugo Gargiulo and Maria Bonzanigo, she co-founds Compagnia Finzi Pasca, a new structure uniting the destinies of Teatro Sunil and Inlevitas. That same year she is the creative associate for the opera Aida, by Giuseppe Verdi, produced by the Mariinsky Theatre in St. Petersburg (Russia) and of Ruggero Leocavallo’s Pagliacci, produced by Teatro San Carlo (Italy) and presented at the Mariinsky the following year.

For La Verità (2013) she acts as co-creator, creative director, producer and international development. In 2013-2014 she is the associate artistic director for the Olympic Closing Ceremony and the Paralympic Ceremony in Sochi (Russia). In 2014 she works as creative director and producer for Bianco su Bianco and starts working on the show for the next Fête des Vignerons (Winegrower’s Festival, 2019), a celebration that takes place every 25 years in Vevey (Switzerland); in 2015-2016, she is co-author for the Cirque du Soleil show Luzia. Her last precious contribution was for Montréal Avudo, a multimedia poetic homage to her birth city, Montreal, on the occasion of its 375th anniversary (2017). A very successful show that premiered shortly after her passing away, in spring 2017. The show Per te (2016) produced by Compagnia Finzi Pasca, was dedicated to her loving memory.

The shows Nomade and Rain (both written and directed by Daniele for Cirque Éloize, 2002 and 2004 respectively) for which Julie plays the role of creative director and producer receive prestigious recognition: the award as “Best DVD of a show” and 2 nominations at the Gemini Awards (Canada) in 2005 for Nomade; a nomination as “Best Touring Production of the Year Theatre Award” in UK in 2005 and another nomination as “Best Show” at the Broadway Drama Desk Award in 2006 for Rain.